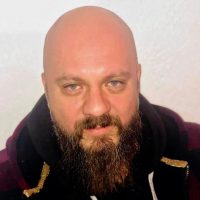 Nelson Santamaria – Born into a Musician’s family in Mexico, my first love with Heavy Metal music was kind of a natural occurrence. Playing guitar with some local acts for many years I found through my music (and the fantasy worlds depicted in Heavy Metal) another way to see and experience life.

A long time reader of the Urantia Book, a book believed by many people to be the fifth epochal revelation, this crazy Mexican has in his human experience many good and bad memories, all linked as a chain by a common theme: everything happens according to the Universal Father’s will.

Now let me tell you a little story:

Four or five years ago I felt really down – in a spiritual way.

I wondered: “Is this all that there is in life? People selling and trading money for self-regard and peace of mind… Nations keeping people enslaved by consumption and T.V., and all the nonsensical violence.”

So I asked, really asked: “If someone, somewhere in this planet had had enough of all this, I thought to myself: “I can’t be the ONLY one who’s fed up with all this!”

Next thing you know I found The New Earth Nation (NEN) by “luck”, I know… there is no luck, only attraction, and I became amazed, overwhelmed by the idea: this was it!!! … what I was looking for my entire life!

Suddenly I wasn’t the “crazy one” anymore.

So I wound up translating some documents for the NEN into my native language; and at the same time felt totally convinced that the only way to thrive was at last before my very own eyes.

Since that day I became really interested with the creation of new ecological and self-sustaining communities as the best way to evolve and to get away from fear.

You know… you can’t destroy an obsolete system by force, but you can change it for a better one.

Nelson has been onboard NEU since 2018 and assists the Administrative Team with Spanish Translation Projects.