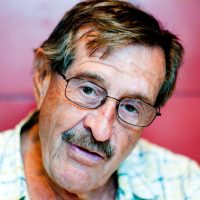 “We must become both hospice workers to support the peaceful dying and letting go of our traditional culture of fear and cynicism, and midwives to gently usher in our emerging culture of trust and mutual regard – and with it a more hopeful human future.”  – John Vasconcellos

John Vasconcellos retired November 30, 2004, after his 38 years representing ‘The Heart of Silicon Valley’ in the California Legislature.  He passed from this plane in 2014.

John’s tenure was most informed and distinguished (even made unique) by reason of his having engaged himself all those same 38 years in his own personal odyssey – especially in his ‘Search for Himself,’ ‘Toward Becoming A Person.’  His first of many trips to the Esalen Institute was in its founding year 1962.  He went on to become a personal student of Carl Rogers, Rollo May, Abraham Maslow, Stanley Keleman, Virginia Satir, James & Elizabeth Bugental, John Heider, Will Schutz, James Fadiman & Richard Farson.

His most significant legislative achievements fully proceed from and reflect his own personal odyssey (which in turn reflects our culture’s odyssey over the period of his legislative tenure) and are mostly still reverberating today:

• Authoring the legislation (made notorious by Doonesbury’s 3-week attention) creating ‘The California Task Force To Promote Self Esteem and Personal and Social Responsibility;’
• Creating ‘The California Task Force for Positive Parenting;’
• Chairing for a record 15 years the powerful Assembly Ways & Means Committee;
• Creating SCA14 – the most comprehensive 10-point program for reinventing (so as to enable it to overcome its dreadful stalemate & dysfunctionality) California state government & politics (including a reapportionment commission, modification of stultifying term limits, public financing of campaigns, ethics provisions for campaign consultants, increasing the number of legislative districts (for more representative democracy) and more;
• Carrying into law the Williams case legislation assuring enough state money to provide equality in tools for educational advancement for California’s most under-privileged & most ‘unrealized learners;’
• Twice chairing the Legislature’s biennial review of the California Master Plan for Higher Education – the premier system in the entire world;
• Authoring the Cal Grant Program – providing needed aid to all qualified Californians to pursue higher education, together with AB1725, the ‘Magna Carta’ of the California Community Colleges;
• Creating & chairing ADEPT – the Assembly Democratic Economic Prosperity Team (considered the most significant California government initiative in last 25 years supporting economic development;
• Composing both strategic action plans – TOWARD A CALIFORNIA/JAPAN PARTNERSHIP & TOWARD A CALIFORNIA/BRAZIL PARTNERSHIP;
• Chairing the Senate Public Safety Committee, developing its ‘Tough & Smart Public Safety Program,’ putting a halt to expansion of California’s excessive ‘3 Strikes & You’re Out’ law;
• Leading the State of California into transforming its approach to the use & abuse of drugs to the ‘Harm Reduction’ model, including the fight for research & distribution of medical marijuana; also recipient of the Richard Dennis award;
• Leading the charge for recognizing California’s primary challenge. ‘To realize the promise of our multicultural democracy, with gender equity, in the global economy, in this age of technology;’
• Overall, designing a 16-point ‘Expanding Human Agenda,’ translating vision into real-life action.

‘THE POLITICS OF TRUST’ is grounded in Carl Rogers’ faithful vision, ‘That we human beings are innately inclined toward becoming life-affirming, constructive, responsible & trustworthy.’ Its mission is to empower every Californian (as a model for all Americans) for effective civic engagement, according to our faithful vision. ‘THE POLITICS OF TRUST is based upon a faithful vision of ourselves, our human nature and potential (directly opposed to and challenging the cynical vision that informs most traditional politics today).

“As traditional politics continues to deteriorate (becoming ever more cynical & negative, divisive & dysfunctional & disheartening, in both state & nation, even largely in both major political parties), ‘THE POLITICS OF TRUST’ grows ever more recognizable as the most promising (both profound & pragmatic) & empowering alternative pathway (serving as both unifying vision & organizing principle) for moving us altogether and forward toward that new hopeful human healing politics so many of us (especially progressives) have so long been hungering & searching for.”

To learn more about The Politics of Trust, visit the website: www.thepoliticsoftrust.org