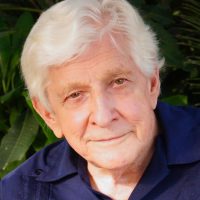 Jim Humble first began his work in the health field in his early 20s when he became the manager of a health food store in Los Angeles, California.  He authored a 200 question “Nutritional Evaluation Test” that determined the vitamins, minerals, proteins, and fats a person’s body might be deficient in.  The test was later computerized and was considered by many to be the most accurate method of determining deficiencies known at the time.  Over the years Jim has maintained his interest in alternative health, and worked with numerous healing modalities including healing his own broken neck in record time using magnets.  He has authored many books on various subjects.

Jim first started his career in the Aerospace industry, where he quickly became a research engineer.  He worked on the first intercontinental missile, wrote instruction manuals for the first vacuum tube computers, worked on secret radio control electronics, and dozens of other “state of the art” electronic projects at Hughes Aircraft Company, Northrop Aircraft, General Motors Research Defense Laboratories, and others.

After 20 years in the Aerospace Industry, Jim went into gold mining where he developed methods of gold recovery that replace the use of mercury to help overcome health issues for small miners.  He wrote five books on the subject of recovering gold from its ores.  In 1996, while prospecting for gold in South America, he discovered what has come to be known as MMS, a simple health formula that eradicates most diseases.  In the years that followed, he worked to further improve the formula. Eventually a missionary group invited him to Africa where he successfully helped over 5,000 malaria cases and victims of other diseases recover their health.  Since that time, hundreds of thousands of people have used MMS to recover their health from a wide range of diseases.  His current developments on the use of MMS are outlined in the MMS Health Recovery Guidebook which is available at: jhbooks.org

Gratitude to Jim for gifting the world with his latest book, The Solution, available free to download at this NewEarth University (NEU) website homepage.  He joined NewEarth University in 2019 after being a legendary key presenter at the NewEarth Festival in Bali, Indonesia during its 3-day, unprecedented World Health Sovereignty Summit.