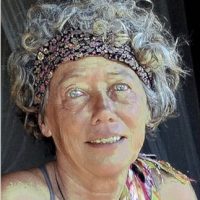 Jane was born in the UK, grew up in South Africa and came to live in the US in Minneapolis, MN in 1984.  In that same year she won the Minneapolis Metro Transit bus design award after which she launched a career marketing journals, books, large prints and notecards of her art which she marketed across the US and in many other countries for 25 years.  During this time she spoke at many universities and colleges, sharing her art and poetry, winning awards and various commissions.

In 1994 Harper Collins published a book of her Art and Poetry.  In 2000 Jane transformed her home into a gallery and fundraising venue in Kenwood Minneapolis MN, USA.  In 2006, after her children had left home, Jane went to live in the woods of Wisconsin for 7 years where she continued to paint and evolve her style without the constraints of everyday life.  Upon her return to Minnesota in 2013, Jane began her Remembering the Divine Feminine series as a natural evolution from her earlier Power of Woman and other series that spoke to environmental degradation and the parallels of women’s rights (or lack thereof) worldwide.  She also began teaching children’s art classes at Joan of Art Studio in Minneapolis.

In 2018 Evershed spent 3 months designing and painting the mural designs for Ubuntu headquarters in Mpumalanga South Africa for Michael Tellinger at Stone Circle Lodge.  Jane’s work is ultimately inspired by nature and our relationship to it.  She observes the genius of the natural world and allows it to determine lines of life on the canvas that often evolve into otherworldly dimensions and states of consciousness not yet arrived at by our slow evolution.  Examples of these would be LEAVING TIME, STEPS TO HIGHER DIMENSIONS and CHANTING DESTINY, to name a few of her latest works.

“My artistic endeavor throws abstract art into the dustbin of pedagogic art history. Art is meant to reveal the higher self of humanity striving for the zenith of the aesthetic. What happened to that high notion? Did art become reduced to a means of laundering money in a world where the elite control the art market perhaps? Did art fall martyr to the digital gods? Oil painting, like stained glass windows should be a part of life, like growing a garden. These skills must not be lost to humankind. Our schools are remiss in teaching art in many ways for many reasons, I hope to help fill this void by sharing the basics of art in a simple way with children.”

(I am currently working on a Coffee Table Book with Sacha Stone for the ITNJ: International Tribunal for Natural Justice in conjunction with the NewEarth Project); and, an art teaching book for teachers and children called SPLAT: Simple Painting Lessons & Art Tuition (Working Title).

Also, I’m currently painting a new series: Organic Intelligence, inspired by the World Health Sovereignty Summit at New Earth Haven in Bali, Indonesia 2019 (which I attended).  Subsequently I joined the NewEarth University faculty of the School of The Living Arts, discipline of Sound & Music, Visual and Performing Arts where I shall be developing and teaching creative art curricula.