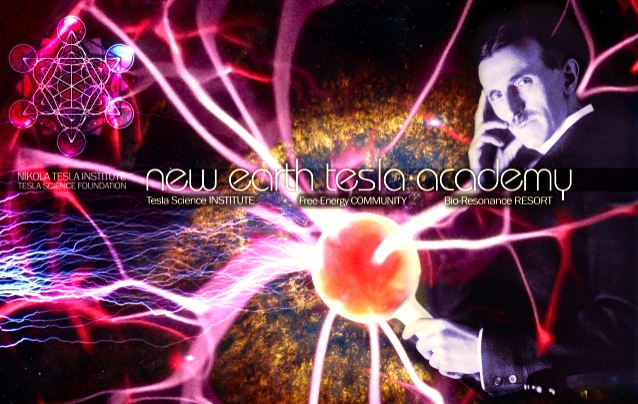 NEU’s School of Science & Design Innovation honors the groundbreaking work of Nikola Tesla.  Volunteers at the school’s discipline, NewEarth Science & Technology (NEST) have partnered a few years ago with the Nikola Tesla Institute in Brazil to design unique projects and initiatives – the developing NE Tesla Academy, and The Human Bio-resonance Project.

The Tesla Academy is being designed as a global springboard for the remarkable and pioneering works of the Nikola Tesla Institute.  With the vision and guidance of longtime New Earth friend and NEU fellow, Boris Petrovic, its intention is to conduct research and development in New Energy and Bio-Resonance Technologies.  This noble activity brings together many passionate researchers, authors, inventors, artists, and entrepreneurs, who look to Nikola Tesla as an inspiration.

The Tesla Academy plans to offer laboratory and online/virtual tutorials and seminars, workshops, and videos regarding the work, history, and vision for a future civilization, through the eyes of Nikola Tesla and other renowned visionaries.

The Human Bio-resonance Project is purposed to creating the world’s first Center for Bio-Resonance.  It is envisioned to be a research and education environment center integrating the Noosphere paradigm (the sphere of human thought) into an integral educational curriculum to be shared through the NE Tesla Academy.  The intention is to serve as a technology transfer hub for implementation of innovation in bio-resonance and consciousness technologies.  Visit the Human Bio-Resonance Project for more information.

About the Nikola Tesla Institute

The Nikola Tesla Institute was founded in 2012 in Brasília, Brazil as a non-profit scientific organization with a goal of popularizing new energy research.  The Institute houses a functioning, fully automated laboratory, built to carry on research in Tesla technologies, with the goal of development of new energy technologies, wireless energy transmission and research and development of human energy (bio-resonance) technologies.

Designed using NEU’s Design & Development principles, the ecological construction proposed for the Institute’s new headquarters will house an expanded laboratory facility, together with a small classroom, a workshop and an office space in the central area.  In front of the laboratory a 50kW Tesla Magnifying Transmitter will be permanently used as part of the Earth Resonance Project – providing scientific proof of feasibility of the Nikola Tesla global wireless energy transmission system.  The Bio Dome and Bio-resonance holistic treatment constructions will be embedded in the natural landscape in the Chapada dos Veadeiros region in Brazil.

In the 21st century, the technological possibility of the global system of energy distribution, envisioned by Nikola Tesla is a reality.  The fundamental research work within the Nikola Tesla Institute in Brazil is to provide experimental evidence of the possibility of wireless energy transfer using the Earth Resonance Method.

Traditional scientific thought accepts the existence of vacuum fluctuations and the resulting force, and one of our goals is to demonstrate the ideas of Nikola Tesla in regard to the all-pervading universal medium facilitating wireless energy transfer at distance without losses.  The observations of Nikola Tesla during his experiments with high-frequency currents, and the effects (such as ball-lightning) could reveal a source of energy of infinite potential.  Our laboratory work in the Institute in Brasilia is providing a global open-source research and development platform towards the continuation of this work – of great importance for the survival of humankind.  Visit the Tesla Institute for further information.