Researched, compiled and written by NEU volunteer faculty and staff at the School of Natural Law:

We live in a world where government and finance has taken over every part of our lives – elected representatives are working for corporations funding their campaigns, police use violence towards the public in the interest of “public safety,” and what we are told is the justice system has become so corrupt that it refuses to follow its own rules…

So, the time has come to ask ourselves one critical question:

“If I ignore the warning signs and don’t do what I can to fix these problems now… what kind of world am I leaving to our children and grandchildren?”

The unprecedented initiative, International Tribunal for Natural Justice (know simply as the ITNJ) was birthed in 2015 by many dedicated individuals, now championed by a Committee to Support the ITNJ as well as NewEarth University’s School of Natural Law with its associated fellows, faculty, and staff.  Together, all are a worldwide group of volunteer researchers, lawyers, former government employees, business people, retired people, parents, grandparents, daughters and sons standing in solidarity.

In answer to the aforementioned question: Each individual is now driven by a great passion to restore balance and equilibrium to human society by holding the corrupt accountable for their actions.

The ITNJ operates in harmony with natural law – its forum is public, its rules of operation are transparent.  Judges and court personnel are dedicated volunteers from all walks of life, from all corners of the world.

The ITNJ is a world court – for the people and by the people. 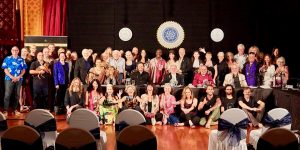 2019 ITNJ Judicial Commission of Inquiry into Weaponization of the Biosphere, Indonesia

What is Natural Law?

Natural law is defined as law consistent with nature and so is universal. In the context of human justice it may be best described as that which the conscience of all good wo/men would propose. Its application by the ITNJ is therefore interpreted as equity, or the fairness, reason, and common sense by which all man-made laws are to be measured.  Unlike common law which is local, natural law is universal.  In other words, justice which respects natural law would be the same in Milan, Spain as in Virginia, USA.

Who are the corrupt to be held accountable for their actions?

There is no doubt the court system has become corrupt, fraudulent, and criminal.  An example of many: Rod Class and 2000 researchers diligently documented the abuse in the landmark DC Gun Case.  The number of violations witnessed from Judges, Prosecutors, Public Defenders, and Court Clerks provides clues that the for-profit corporation is intent solely on financial gain for its owners and the Administrative Agents serving as willing enablers – clues which have led to investigations that reveal the most unimaginable.  Extreme harm has befallen Mr. Class in his longterm plight for justice, but he is certainly not alone – millions of men and women are incarcerated on “State Crimes” where the only “victim” is a greedy, voracious WAR MACHINE turned against the People.

The Courts have long hidden behind the words “justice,” “law” and “government” to lead the people to believe it is fair and follows the law as “government of, by, and for the people.”  The evidence that this is an outright lie is now incontrovertible.  This corruption is absolutely not limited to the United States – the brutal and systemic raping of the peoples’ property, their children and their financial futures is a systemic worldwide problem that must be addressed.

The International Tribunal for Natural Justice is dedicated to exposing this corruption in a public forum.  Dedicated people from all walks of life volunteer their time, energy, and most importantly their love for the next generation, to participate in this People’s Court.  The ITNJ will hold court and show the public who these Administrative Agents really are, who they work for, and how they have knowingly benefited from robbing the people of their birthright, their property, and their right to live in peace.

After all, Justice-making belongs to JUST US.  It is our right, indeed it is our incumbent duty to create the world we want to live in.  Will you step up and join with us?