dome energetics from the new earth project: why the dome shape? 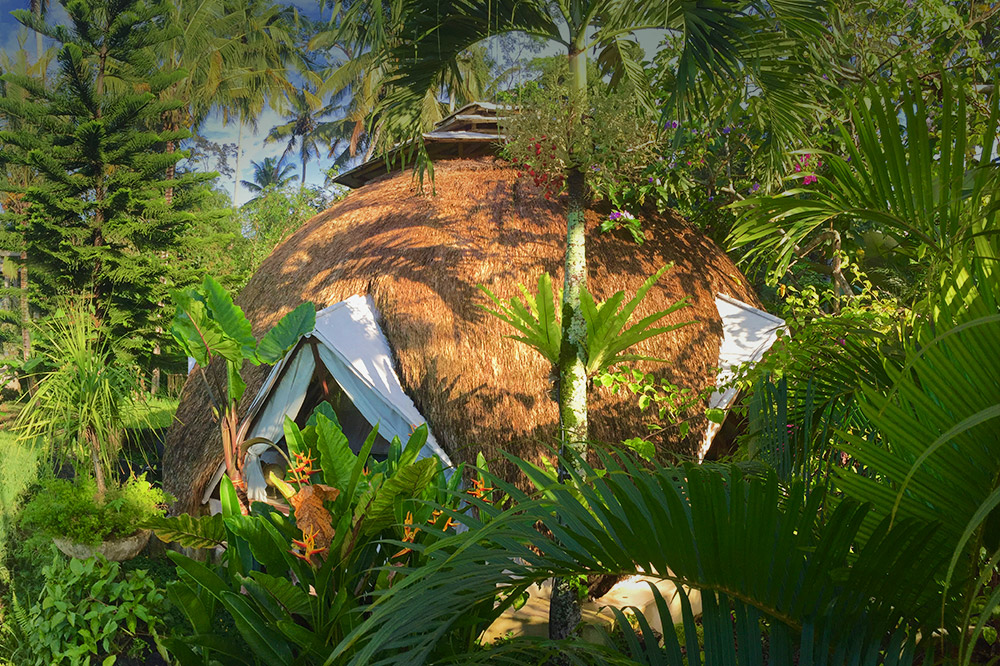 why the dome shape?

Many cultures have understood the principles of power and shape and how specific shapes can create field effects that have a beneficial influence on consciousness and life. 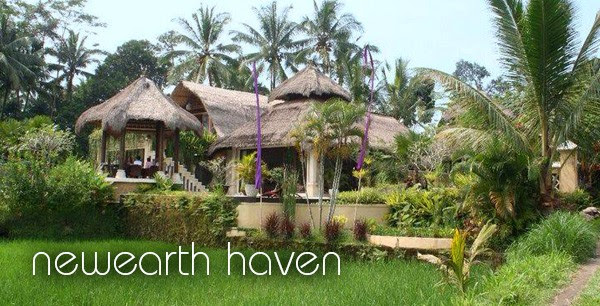 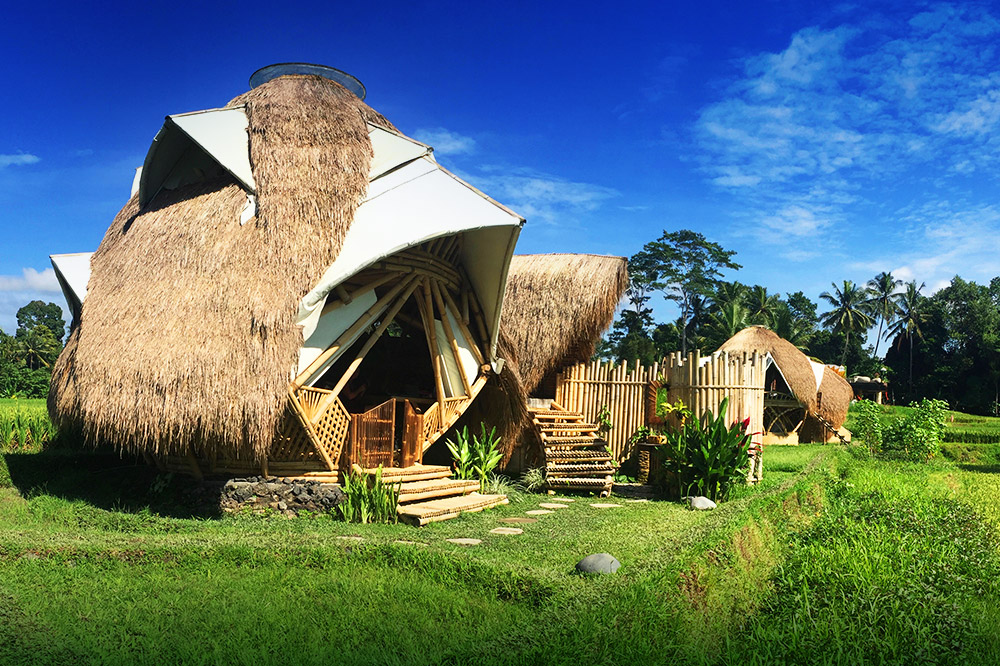 energetics of a dome

The specific energetics of a dome can be perceived in the work of Victor S. Grebennikov, studying what he referred to as cavity structure effect, CSF.  In his work he researched how a particular type of beetle used its structure to create an antigravity effect, utilizing the resonance generated by a grand number of cavities in the composition of the material structure of their wings, producing an amplified CSF.

A similar human-made device was used to produce healing and therapeutic effects for practical applications in medicine, agriculture, and technology. 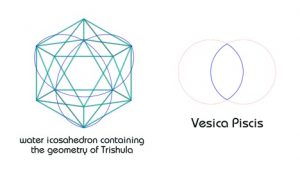 This form of energetics can be easily felt and measured by triggering the movement of a needle and can be measured by the use of pendulums that detect the particular qualitative property of this energy.  In bio-architectural terms, an egg-shape is a spherical bio-capacitor and such a structure is able to generate a fractal phase conjugate electrical field connected to all life biology and self-organizing systems.

We can realize how this implosion-point of ether/charge at the center of this structure forms an intrinsic part of the energetic quality to all living organisms and all biological systems.

Any structures that we create incorporating such a shape or “cavity” will create this effect, and therefore will be highly bio-resonant to all life and consciousness, forming one of the most preferred shapes for living spaces. 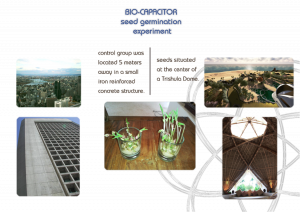 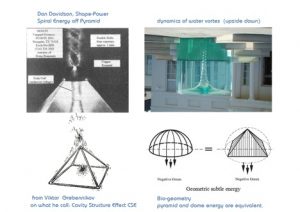 An Orgone Accumulator is a system that is able to attract and accumulate Orgone energy or life force from the environment, as proposed in the original work by Wilhelm Reich (in the 1930s), using containers made of metallic and non-metalli 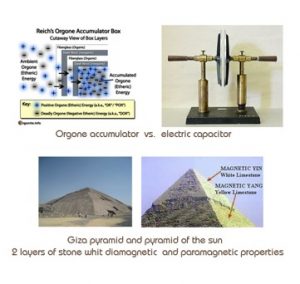 According to Reich’s experiments (with what he called Orgone energy), organic and non-metallic materials will attract and concentrate Orgone, while metallic materials will attract and immediately reflect it.  Viktor Schauberger, who described how this energy could travel through organic non-conductive mediums, also called orgone energy “diamagnetic energy”.  Later it was referred to as, fractal dielectric capacitors, by Dan Winter.

These principles were used in the temple buildings of antiquity.  For example, in Egypt one can see in the energetic morphology of the Great Pyramid of Giza, that the main body of the pyramid is made from stone with a high level of iron oxides, which is responsible for the yellow color and para-magnetic behavior of this stone.  A dia-magnetic layer of white Tura limestone composes the outer layer, (this was mined by other cultures and now remains on the top section).  The inside of the tower chamber of the Great Pyramid is constructed from pink granite.  Phillip Callahan’s research into para-magnetism revealed pink granite as one of the highest para-magnetic stones.

Fundamentally when we compare the similarity with Orgone Accumulators, we find that the same effects can be created by the alternating layers of materials that produce an opposite effect, respect to the presence of a magnetic field (this is how dia-magnetism and para-magnetism are defined).  When we layer them in this fashion we are creating a contrasting pattern, an electromagnetic landscape of peaks and valleys of magnetic energy, which generate and induce a flow into the ether/charged field.

This can be compared to the effects produced by zebra stripes: the changes of temperature on the zebra surface produced by the black and white contrast regions produce a passive air flow (called ‘zebra effect’).  This effect of layers and alternative surfaces with opposite qualities has similar dynamics.  This is also used by biological systems, which are living, dynamic sacred spaces.

The apex of the interior space is where the negentropic field generator is situated.  Different forms of this device can be used in the space; there are more precise definitions in the principles of the nature of this technology.

Looking at the energetic nature of an object or symbol, we can realize that often the effects created by art served in the creation of sacred space.  It will – in some degree – have this coherent field effect, therefore the conception of art (in this case) must transcend its material aspect, to the realization of its deeper function in the creation and harmonization of subtle energy fields.

In any case, a greater effect can be achieved by the use of bio-architectural principles and other energetic concepts.

A special place is dedicated to the Agnihotra pyramid, a holistic technology that is known for its extensively documented effects in the environment and beneficial healing properties.  This is an example of a negentropic field generator, which creates a highly coherent phase conjugate fractal field effect, and we convey its use in the domes, as it is one of the ultimate regenerative tools. 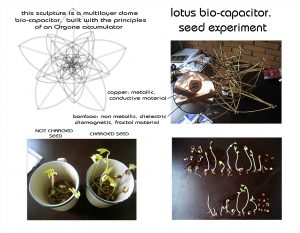 A more technologically advanced way to produce beneficial healing effects and enhance growth is the use of frequencies and longitudinal waves.  In this case the center of the dome also becomes the channel from which frequencies can be transferred, to a network that will connect different domes.  The effect propagates frequencies through the ground, creating an energetic shape that reflects the overall geometry of the lay-out, and generating a regenerative and grow-force effect.

“… this would also mean that weather and the metabolism of our planet which keeps us from chaos (obviously now breaking down quickly) – could be restored to negnetropy / self organization – by carefully feeding the correct low frequencies globally to increase the critical phonon phase conjugate pump wave.  This is obviously related directly to the conjugating dodeca symmetry of the Earth’s electromagnetic grid- and especially note how the Schumann resonance harmonic series almost precisely fits the phase conjugate golden ratio (caducceus) frequency cascade down to Planck.”  – http://www.fractalfield.com/ 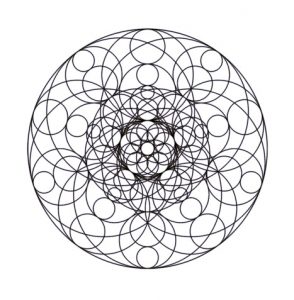 The grid on the floors can be designed with different geometric shapes and materials to perform the function of bringing the earth’s negative electric charge to the space and it inhabitants.  At the same time within this system, the geometry is generating a coherent field, further enhanced by the earth’s energy.  The restorative qualities of the grid system can be specifically designed for the healing proposes, adding phase conjugate systems, magnetics, and the use of frequency or sound, to become a tool for regenerative purposes. 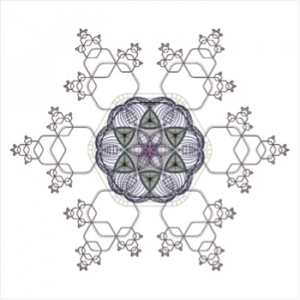 Water bodies play a special function in the design and energetic quality of the space; water is a living element that is profoundly correlated to ether.

Water ponds and rain water collectors are an intrinsic part of the design of the space.  They perform a functional aspect; water collections are used for different areas of the community, but also the water becomes an important energetic aspect of the design.  Concentric rings of water have an energetic effect that generates phase conjugation and affects the energetic quality of the environment, but also the use of specific shapes can energize water by morphic resonance and other bio-architectural principles.