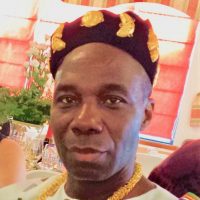 Greetings to all the NewEarth University Honourable Dignitaries. I give my gratitude to you for inviting me on this pedestal of eminent intellectuals. It is a great honor and truly humbling. Please bear with me as I am borrowing this language for communication purposes – I hope you will understand my message.

and to all the Deities that you have been tirelessly worshiping to bring protection and prosperity to this noble family lineage that I am so proud to be the descendant of. I hereby vow to stand by the divine principals at all cost. I vow to keep the tradition alive for the benefit of my people and humanity in general.

I was born in a small village called Noppa (now Dahiepa-Kehi) in the central west of Ivory Coast, in a rigid Bhété tradition family. I was sent to the European colonial school like every other child of the village after my first seven year cycle. In my culture the life of a man is divided into 9 degrees and then these 9 degrees are further subdivided into 3 stages. Each degree corresponds to 7 years.  From birth to the seventh year, one is in the first stage of the lower degree. That is when the child is in his mother’s school; he trusts and obeys only his mother. He believes only in his mother, all that is said to him he comes to ask his mother e.g. Dad said that to me, is that true, mum? So, he only sees things through his mother’s eyes for 7 years.

WHAT IS A MAN AMONG THE BHETE PEOPLE?

My Uncle Bahie Yahou Mahi, who was the Chief at the time, and the other village Elders had already detected leadership potential in me from my early age. This was later confirmed after I successfully managed to reconcile the elders and dignitary members of my village who had not spoken to each other for over 10 years.

For Bhété people, to be a Chief is to be knowledgeable of the tradition. Leading a people is a very serious matter. It requires a lot of qualities as you will be dealing not only with your people, but also with other forces and beings.

The French colonialism had almost destroyed all the symbols of the traditional culture: the traditional teaching was not only outlawed by the colonial rulers, it was also replaced by Christianity and the elders were desperate. We are not believers, we are knowledge seekers; because for us a person who believes doesn’t know, “do you believe you have two hands, or you know you have two hands?” However, my family could secretly teach me some sacred traditional knowledge that has been kept pure and passed down from generation to generation. We say that “a society that loses its symbols loses its identity and, in the process, loses touch with itself.”

Then started my first level of initiation in traditional leadership. I was exposed to cultural rites through strict practical traditional training. In the tradition we live a life of principles, our societies are ruled by principles. Principles mean: no matter what you don’t break it. Maybe that is why we did not have police forces nor prisons; even some village house doors did not have locks, we did not need them as nobody would steal from another village person due to the principles. We say that when a people are well educated they do not need to be told what is right and what is wrong. Besides we consider a human being as a divine being; we wouldn’t put a divine being in prison. When it occurs that there is a complaint about someone’s behaviour, the trial concerns the community as whole, not only for the wrong-doer. We say to ourselves; how did we produce such a person? Where did we get it wrong in his/her education?

One day my uncle called me to entrust me with a mission. He told me that my ancestors were sending me away deeper into the enemies’ territory. I had to learn and understand the very people that had defeated my people and destroyed their culture so that it will not happen again. “We only discover the kapok tree’s thorns when we get closer to it. Otherwise, from far, it looks like a white silk-cotton tree with a very smooth trunk”. He would be transitioned while I was be gone, but I should not be worried about his funeral. If I stand strong on my principals, the ancestors would stand by me and I wouldn’t know shame. I would come back with the needed knowledge, the enemy’s blood and material wealth to restore the lost tradition. As a traditional Chief, it is my duty and life mission to restore and protect that culture.

The Bhété Tribe, a subgroup of the Kru people, were Africa’s sailor tribe, who refused to be captured into slavery and settled on the south-west and central-west of The Ivory Coast (West Africa) since 1069 (11th century).  Bhété culture is hierarchical and heavily influenced by a traditional democratic system at the village level. In this culture, the village Chief acts as a spokesperson of the people rather than a ruler who others are forced to blindly obey.

Among the Bhété, the Chief is held accountable for his deeds (it’s very rare to see women selected as chiefs). Elders select a village chief for a limited term; at most five years, after which if he performs well, he may be re-appointed. However, another person can be selected in a case where the Chief performs abysmally. This selection is not based on royal lineage or family ties to rulers, but on the individual’s Character, Statecraft and achievements. In general, the Bhété resent authority. A key belief in Bhété culture is that everyone should gain his or her recognition in a society based on his or her skills, abilities and deeds. Power is not considered an important indicator of societal differentiation. The holder of power is perceived as a spokesperson not a ruler. Modern Bhété tend to resent autocratic leaders and people and expect to be treated with respect and dignity from those in power.

In my lengthy years in studying the western culture, I have not only learned how and why the Europeans destroyed the traditional cultures all over the world, including their own. Humanity on a whole is being hijacked by a small group of greedy people, who first destroyed the family structure.

I married a European woman (blood of the enemy, according to my ancestors), I have learned about the rich history of my own people that Europeans have kept in their archives and would never teach us in their colonial schools in Meritah but most importantly. I got initiated in M’tam; the original, oldest and purest Kemetic form of spirituality we believed was lost with the fall of Kemet (the creed of knowledge by excellence).

THE PURPOSE OF KHEPRA

To address the issue of the impasse my people are plunged in today by the colonial system, there is a need for cultural re-education of my people in their traditional values. There is also an urgent need for the eradication of poverty and the reintroduction of hope, the spiritual identity of my people, and a reconnection with nature in the humblest manner, for a more holistic use of our natural resources. I believe these needs can be effectively addressed and obtained through a sustainable eco-farming educational project.

Dignity is everything in traditional society. When you have lost everything, dignity is the only thing you’re left with. This is why it’s taught in our culture that you can beat even your fierce enemy, but you must never humiliate them.

It’s also taught that whoever wants to help someone must wait for the night and put what he can in front of his house. As a result, when these people wake up in the morning, they quietly pick up the gift but ignore the identity of their benefactor. And the next day when they walk in the village, every person they meet becomes the potential benefactor.

This is the way to weave links and cultivate solidarity without removing the less fortunate dignity.

To save the society there is no doubt, we must reinstate the woman in her role as the family structure holder. Woman is not only the procreator, she is also our first educator; she is the back bone of the society. KHEPRA (the Kemetic [ancient Egyptian in today’s terms] God of transcendence) will have special interest in young girls and women education…

The idea that the world is a place where diverse values and traditions coexist is as old as human awareness.

According to the traditional spirituality, despite the greatness of ideas, this Earth by itself is a place too big for the application of one tradition, one culture, or even one intelligence. The priests of Thebes themselves have encouraged mankind to set themselves into tribes, groups, lineages, and villages, etc…

All according to the ideal model that we find inside the conjunction of the complex relations that exist among Gods. For priests, there is a lesson to learn in the fact that the Earth is a spherical form: “so that another world can exist in the limits of our horizon”, a world that might be as absurd as ours and suffering from its own imperfections.

But none of them should impose their truths upon the other. Where I come from, we say that nothing in nature lives for itself. Rivers do not drink their own water. Trees do not eat their own fruits. The sun does not shine for itself. The flagrance of a flower is not for itself. To live for one another is the rule of nature. We rise by raising others.

TO SAVE HUMANITY, WE MUST SAVE THE TRADITION.