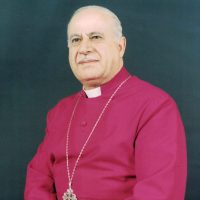 Bishop Riah served in different capacities: an active member of the WCC Commission on Human Rights; Co-Chair of the World council For Religious Leaders; Co- Founder of the Nazareth Democratic Front, Secretary General of the Progressive Movement; third candidate for the 1984 and 1988 Kenneset; Chairman of Dr. Anis Fund; Chairman of Al-Sawt (Voice) Publishing House; visiting Lecturer at St. George’s College, Jerusalem; Founder of Bishop Riah Educational Campus in Nazareth; and a member of the Board of Trustees of the Academic Arab College For Education in Israel – Haifa.

Bishop Riah brought to the episcopate a ministry that has been nurtured by his hometown, Nazareth, where he served as rector of Christ Church with distinction for twenty-seven years.  At the very basis of his ministry is his calling to justice and peace for all people and the setting at liberty of the oppressed as those themes are reflected in Jesus’ sermon in the synagogue in Nazareth.  Throughout his ministry he held Jesus’ sermon as his vision, but he paid a price for his faith and his convictions.  He loves to tell visitors that in his own land he became a minority four times, being an Arab, Palestinian, Christian, and Anglican living in Israel.  But as a minority in his own home he became more sensitive to the Gospel of Jesus Christ.  He always spoke with courage and honesty, though as with Prophet Jeremiah, there are people who have not liked to hear the truth which his lips have spoken.

His constant search for new avenues for peace was exemplified in his visit to Chairman Yasser Arafat in Tunis, where he convinced him to bring six Israeli Jewish and six Palestinian musicians together in Vienna to compose a hymn of peace.  Upon his return home he was put under country arrest for nearly four years.  His voice was not silenced, however, as he continued to struggle for justice and peace for both the Jewish Israeli and the Palestinian people.  His vision has always been that Palestinian and Jew could live and work together.

When Christ Church, Nazareth, was renovated, he hired Muslims to do the stained-glass window, Jews to install the heating and cooling system and Christians to be the stone masons.  All three monotheistic faiths were working together to build the Anglican Church in the home-town where the Holy Family lived and worked.  One might say that his dedication to inter-faith relations and dialogue is symbolized in concrete ways.

He is the author of Caught In Between, a book translated into a number of languages, and he contributed to a number of books among them: Walking the Red Line; How Long O Lord; Faith and The Intifada; Judaism or Zionism; and, Christians in the Holy Land.