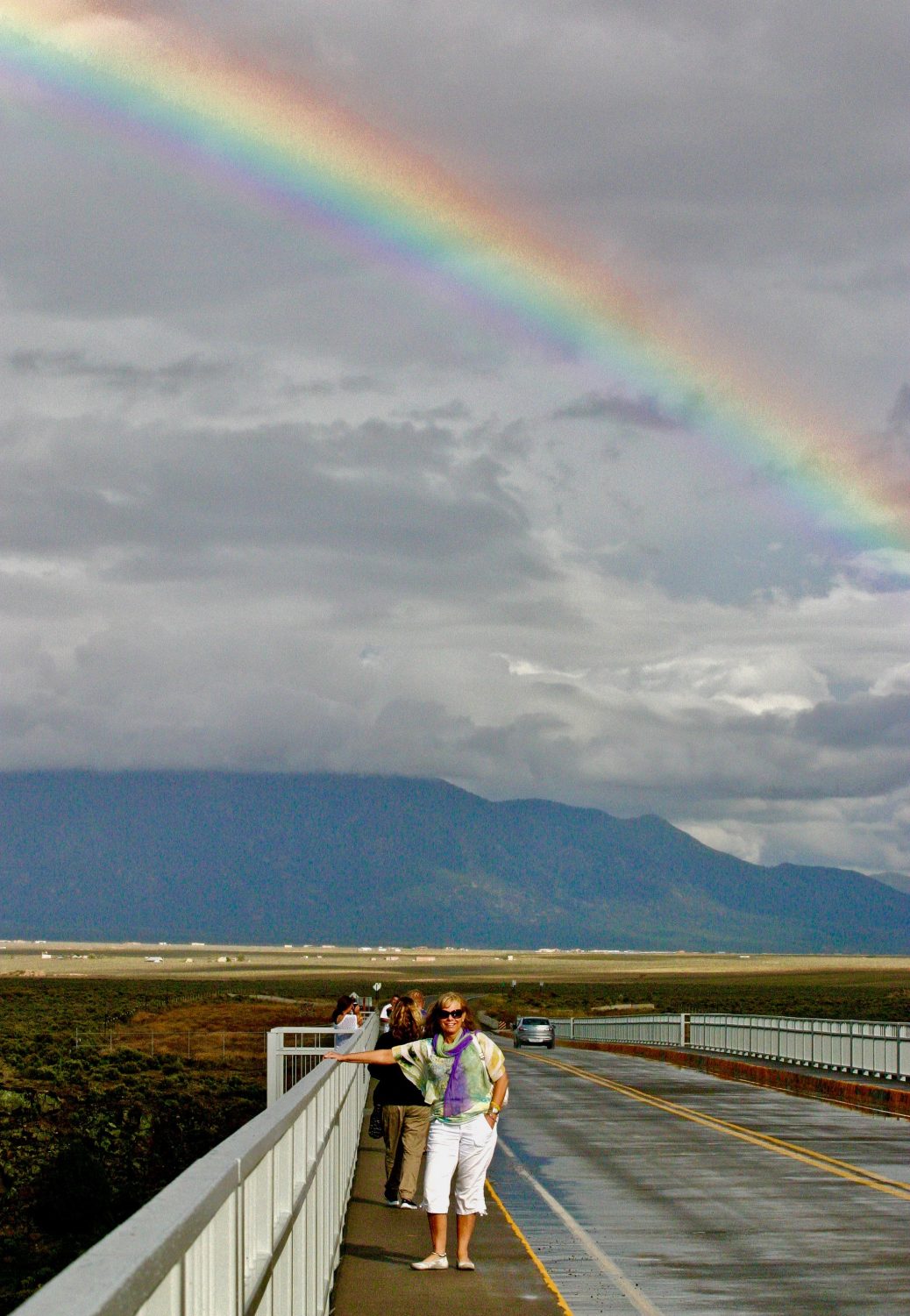 He quietly entered the ornamented basement… Nearby was a ladder beckoning this thoughtful young man to climb up to the top. Having heard the buzz earlier in the week from a London underground clique “that ‘it’ was all the rage,” this renowned musician and serious art enthusiast was checking out an exhibition at the Indica Gallery, just off of Duke Street in Mayfair.

Now perched on the ladder’s higher rung he gazed upward to what looked like a painting, a black canvas attached to the ceiling that also had a spyglass (or small handheld telescope) hanging from it. Mindfully holding on to the ladder with one hand he carefully pulled the spyglass to his eye and tentatively looked upwards to the canvas.

Written in tiny letters was the word: Yes.

This fellow was truly relieved that the interactive art exhibit’s message was positive, i.e., it didn’t say “no” or “screw you” or a much stronger note of angst. [1]  A Japanese avant-garde artist had crafted this unique collaborative piece.  Accordingly impressed with her conscious missive, meeting the progressive artist Yoko Ono on that day was his wish fulfilled, an event that quite frankly changed his life.  I’m speaking here of the famous Beatle, John Lennon, creator of the beloved zeitgeist song, Imagine and many other memorable tunes indelibly imprinted in our heart-mind space.  That’s a brief, but pertinent story of how the celebrated couple (forging through life together as peace advocates) auspiciously met in 1966. [2]

So it was the consciousness of yes that initially brought them together.

And it is the new-paradigm universal message of yes! that we will explore now. But dear reader, there is always a yin and yang to everything—the black as well as the white.  Therefore, there’s always a no as well as a yes.  In pure truth, like shadows from darkness of night as well as the golden light of day, we know both are essential to life experience.  There are significant multi-dimensional benefits to being able to say “no” when you need to—I get that.  In fact, not being able to say no when you absolutely, positively don’t wish to do something is quite unhealthy.  The “yes” conversation on this page is grounded in that wisdom.  It could be no other way because arising from this cosmic velvet bag… the truth comes before yes or no.

Pure truth is the zero-point or sacred ground of the heart from which all arises and abides.

In this perspective, together we may explore new ways of being through a kaleidoscopic lens of Oneness with rich, yes-based clarity.  A yes-field of experience is realizing a consciousness that says “yes” to itself.  This arises interdependently from an inherent awareness of what we call, Oneness.  Yes, we are all “one” though we’re certainly not a bland, homogenized assemblage without individuation.  How absolutely boring that would be!

Some fear that they will lose their individuality, uniqueness and creativity in a unified concept of Oneness.  No—this couldn’t be further from the truth.  In fact, realizing that we are one with all things—every rock, all creatures, the sky and wind—is liberating, inspiring and empowering.  Though constantly changing colorful hats as a professor, university director, mentor, author, mystic and midwife to the new paradigm, I’m essentially just a dot-connector; and with 7.3 billion dots to consciously connect (with our human family exponentially growing daily) there’s a lot of yes-work to do, individually and collectively.

Championing a new-paradigm, a New Earth… many of us are now actively doing this work following Soul’s purpose, as heart-centered sisters and brothers that have awakened from the dream spell.  And to that with gratitude, in grace I say, hallelujah.

As John Lennon’s famous song goes: “I am not the only one…”

Thankfully we are not alone anymore.  A critical mass is barrelling down the birth canal at an unprecedented speed of light. Having been around the block a few times experiencing decades of change, our collective head is finally crowning—yes!

Let’s take a slight departure here and dive a little deeper to investigate roots of three little letters that make up “yes”.  Its etymology—as in most every word—derives from many sources, not one.  Commonly it’s thought that yes is mostly from the Old English affirmative word gēse or gise (with the g pronounced as y) meaning “so be it!” or “yea so” or “yea, be it.”  Etymologists deduce that it’s a combination of ge and se, ge being preserved in the more modern word yea. [3]  In any case, yes is a vote of support or favor for something, used to show consent, agreement or acceptance and also pleasure, joy or excitement.  Shakespeare used it frequently, mainly as an answer to negative questions.  And first recorded in 1913, American English birthed the slang noun, “yes-man” when a sports cartoonist used the sycophant expression in a cartoon, which showed a newspaper editor and several assistants (each labeled a “yes-man”) praising an edition that was fresh off the press. [4]  Obviously to be called one is not complimentary.

Negative stories plague our spirit at every turn.  Yes, there is need to be informed.  Yes, there is benefit to know what’s happening in our world.  My focus is peace, and here in these few humble words is a consciousness of a peaceful yes.  And, relevant to day-to-day life is being sovereign, which is peaceful freedom—being above the condition of control.  I’ve written many times from my soapbox: “Being is the sacred ground for doing.”

Query the meaning of being sovereign to discover that the etymology is derived from ancient Latin, sover meaning “savior” and regno meaning “to rule, reign; to be supreme lord” and also the Latin word super for “above.” [5]  As sovereign women and men we are above being ruled by anyone.  Yes, I am queen of myself.  Yes, I have authority over my own peaceful life.  And, you over yours.  In this supreme power lies the richness of yes-ness, while respecting the yes-ness of others.  It’s a choice to make every morning when our feet touch the glorious Earth: To life, will we “do” the no or the yes?

It’s an astonishing time to be alive now on our planet—pregnant with possibility.  My interest in the grand schema of a New Earth is to simply paint the canvas affirmatively, realistically but encouragingly from the core of pure truth.  If you resonate to this positive message (like Lennon did) then it is my joyful effort to share inspirational musings.

It’s all happening under our nose—the corrupt vs. the noble, the sublime and profane—but dystophic depression will not fill this plate.  We are all experiencing (in our own inimitable way) a cosmic bitch-slapping of some type… to deny that would be folly.  But in all experience that we accept or reject (meaning that it’s either good or bad) there are golden nuggets of truth and grist for the mill.  Renowned Tibetan Nyingmapa scholar, the Venerable Khenchen Palden Sherab Rinpoche was my beloved Dzogchen teacher for twenty years before he passed from this plane.  He used to say this about life:

Until the next new-paradigm story unfolds and enfolds us, I bid you, an ocean of heartfelt blessings in peace.

Nancy Ash, DD, PhD is a modern day mystic and pioneering midwife to the new paradigm since the 1970s.  Her heart-centered voice is heard worldwide as a passionate new-thought-leader, author/poet, web TV host, and former radio co-host championing peace for all women, men and children on this planet.  Nancy is worldwide Chancellor of the NewEarth University, the planetary hub for wisdom-keeping of the NewEarth Project.  Dr. Ash is a professor, graduate/postgrad advisor and Dean of the School of InterSpiritual Studies at New Earth Theological University (formally, Metropolitan University).

In tandem with decades of multi-dimensional work as a Oneness Advocate in the field of evolutionary consciousness, Nancy is deeply honored to serve on the founding Board of Trustees (2015 –  ) for the International Tribunal for Natural Justice (ITNJ), to ensure that human rights are fairly and nobly upheld, restoring justice-making to the people.  She feels that serving in this capacity is an enormous responsibility steeped in integrity, diligence and steadfast devotion to a better world.

Nancy resides in enchanted mountains of New Mexico with her husband; and has authored two books: Garland of Grace: Sitting with the Dying Sun, and Doing a 360: Turning Your Life Around to Follow Soul’s Purpose. For more information: click here

[3] Word Origins And How We Know Them, Anatoly Liberman