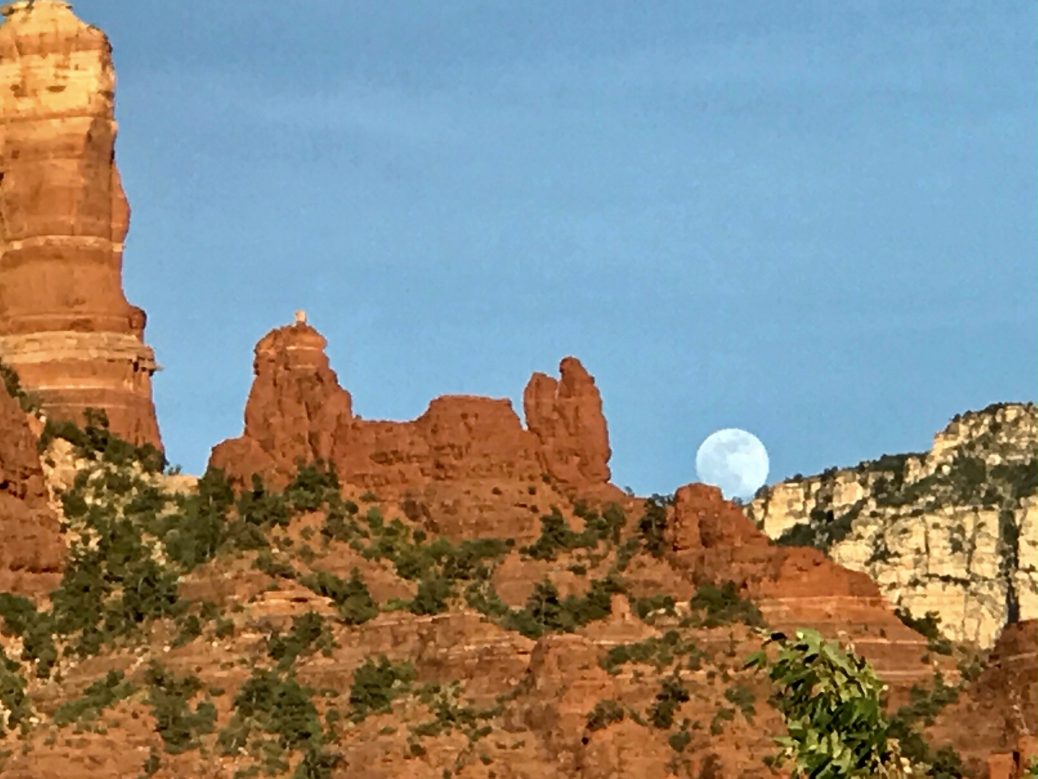 Submitted by NEU Fellow Chief Sylvestre Gnakale, in association with the School of Consciousness & Spirituality – in honor of his Spiritual Master.  (Sedona Moonrise Photo courtesy of Jonathan Ash)

Understanding the Dialogue of Energies

Every element of the existence, in its material and non-material aspect, fits or is made to fit the forms of the universe. In a dialogue of cosmic energies, life presents itself as a part of the multiple communication channels for the Earth.

Life is not the goal of the energetic expression; it is the consequence of a sort of harmony that is created by energies in a given moment of their becoming. It is in this context that we can see life as an entity formed by a dialogue of energies received and emitted by the Earth.

The cycle of conception, birth, aging and death is the physical consequence of the harmony that is created among present forces that degenerate because every channel of energetic expression continues toward its own becoming.

Life carries within itself what we like to call death because what we call life is in reality one of the multiple stages of the becoming. If life can be compared to an egg, we can say, then, that the egg is only one of the stages of the becoming of the chicken, and the chick is another of the stages. The dialogue of cosmic energies is what gives chances to the emergence of life as forms of expression of inhabited planets. It is through this principle of emission of energies that everybody expresses their energetic identity to the cosmos.

In every system, every planet, by their constitution, organization and nature of their constituents, responds to the energies of the other components of the cosmic environment; an energetic response that is compact in the heart of the planet and that refines itself through its diverse expressions. This energetic response channel is characteristic to every planet; it is called Yenu.

Beings are the material expression of the energies coming from the heart of the Earth (a source) in the direction of the universe, as part of the interplanetary dialogue of energies. It will be convenient to keep in mind that these reactions of the Earth, according to the interplanetary energies, are not stable in their diversities. They are born, their intensity is reduced, and their fate is turned off under the laws of cosmic harmony.

On our planet, no form is perpetual; no material life is perpetual, and it is from this principle our consciousness of time as a destructive factor is born, especially for individuals who are shunned by natural, terrestrial and cosmic forces. O Yenu is the energetic channel that is the authority by the fact that it is the most active energy channel in the preservation of the balance of forces and the stability of the universe. This is why the Gourmantche people from the circle of the Niger River in the heart Meritah (Africa) call The great God, Creator of the Universe and Guarantor of the universal stability: O Tienu The interplanetary energetic channel, Creator of forms and active in the maintenance of the universal harmony: O Yenu. The sun as the eye of the Creator God and source of energies: Yienu. Sickness as a consequence of lack of connection between the individual energies and the dialogue of cosmic energies: Yieninu.

The definition of Bayuali is related to the concept of diverse forces that compose the internal cycle of destruction/self-destruction. In the cosmic logic, the law of harmonization is a sacred law; any planet, star or planetary system that cannot contribute to the maintenance of these harmonies becomes an obstacle to it, and is immediately excluded from the rest, and is directed to self-destruction. The dialogue of energies is the law of adjustment and re-adjustment of energies: the behaviour that is adopted by the energies of an entity in response to energetic positions of other entities. It is the “cause-effect-cause” cycle that marks every step of the becoming of the existence.

This makes them different from Earth.

The principle of harmony is the one that guarantees the survival of the whole universe. Through its dictatorial aspect, it imposes itself to all components of the universe. Most of the planets that escape the cycle of destruction have limited the diversity of their energetic expression. On the energetic level the difference between elements that compose a planet does not reside in their appearances but the rhythm of their transformation which is, by itself, defined by the nature of the intelligences that compose it.

The complexity of a body is determined by the number of groups of intelligences that manage the flow of the energies that pass through it.

A rock is, for example, considered solid because its becoming is much slower than a vegetable or animal body; it is also composed of very few groups of intelligences. The nature of rocks and most of the minerals facilitate the participation of a celestial body in the game of universal harmony. They are, then, the greatest receptors and emitters of the energies of a planet in the brute state. The expressing of their energies through animal and vegetable corpses have a more refined (more dictatorial) language of the energies.

Every element of every species of every kind of life has its spiritual identity – a fluid of energy in which the core of the central energy is bathing; this fluid is fed by the centre of the Earth and is in perpetual transformation in harmony with all of the energies emitted by Earth. This principle demands from every being a certain energetic behaviour that fits in the great cycle of universal harmony. This fluid of energies in which our energetic core is bathing presents itself to the subconscious of each individual as the unique domain of their manifestation, meaning the unique interior psychological stability. This fluid is called the Bayuali. At birth, every individual bathes in their Bayuali. This is a new chance given to Earth to perfect its models of energetic expression. When this reality appears not understood by the individual, they find the universe sulking about it; it is mainly on the spiritual level that the consequences appear.

A person who is out of his Bayuali becomes a stranger to the world of cosmic energies, and, as a result, is first spiritually phagocyted and then rejected by nature on the path of self-destruction. The psychic senses become weakened, and one becomes victim of spiritual tyranny of every manifestation of energy. This happens like an irresistible attraction on all the poles of the subconscious, and from this uncomfortable state, the subconscious stops giving the tools that are needed for the individual psychological stability.

Happiness, the result of our subconscious comfort, is not a right, but a result of our participation in the stability of the universe by placing our behaviour in harmony with the dialogue of Earth energies. The lack of connection between our Bayuali and Earth gives birth to psychosis at the surroundings of the individual subconscious. We become invaded by psychosis that slowly trouble the centre of our conception and perception and, as a result, one will see individuals or societies slowly losing contact with the natural reality of their existence.

It is when life loses its spiritual reasons for being that it creates its own reasons, generally from social values or fanatic beliefs, to give their self-destruction a triumphant face.