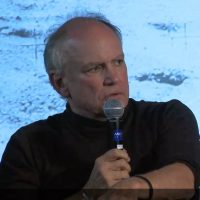 Mr. Stephen Bassett is a leading advocate (in the U.S.A.) for ending the 63-year government-imposed truth embargo regarding an extraterrestrial presence engaging the human race. He is a political activist, commentator, columnist, and the founder and executive director of the Paradigm Research Group and the Extraterrestrial Phenomena Political Action Committee (X-PPAC). Mr. Bassett is the executive producer of the X-Conference and the executive director of the Citizen Hearing on Disclosure.

Presently, he is the only registered lobbyist in the United States representing extraterrestrial related phenomena research/activist organizations, and X-PPAC is the first political action committee to target the political implications of extraterrestrial related phenomena. Between April 19 and November 5 of 2002 he conducted an independent candidacy in the 2002 congressional campaign in the 8th District of Maryland. It was the first instance in which a congressional candidate on the November ballot in a federal election openly addressed the matter of an extraterrestrial presence and the government imposed truth embargo.

The X-Conference was founded in 2004 and in 2008 Paradigm Research Group founded the Exopolitics World Network and Exopolitics United States Network and launched the Million Fax on Washington. More recent projects include the Disclosure Petition Project and the Citizen Hearing on Disclosure.

Since 1996, Bassett has assisted many organizations and initiatives making the case for 1) an end to the government truth embargo, and 2) open congressional hearings to take the testimony of former military and agency employees witness to extraterrestrial-related events and evidence. He has appeared on hundreds of radio and television talk shows and in numerous documentaries delivering the message to millions of people of the likelihood and implications of “Disclosure” – the formal acknowledgement of the ET presence by the governments of the world. His work has been extensively covered in the national and international media.