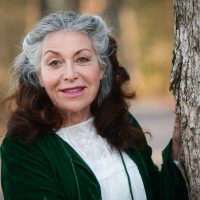 Born in Chicago, Linda was raised the Washington, DC suburbs.  She earned a BA in Psychology from George Mason University.  She has had a long career conducting and analyzing consumer and industry research for such organizations as McDonald’s restaurant chain, George Soros’s Open Society Institute, and major US industry associations.  Known as a “China Expert” from 2000 through 2010, the results of her primary research projects have been used to make policy decisions by the governments of the US, Sweden, and the EU.

“I’ve been on a spiritual quest since early childhood.  Luckily, my parents raised me Unitarian, giving me exposure to many of mankind’s religions and sacred traditions, while opening my mind to fearless curiosity.  Unfortunately, mid-century America did not make it easy to find spiritual information that went beyond Judeo-Christian dogma.  In fact, it seemed as if all other knowledge was called occult or even witchcraft, making it all-the-more attractive to me!

As a teenage hippie, I started to follow the same path as Richard Alpert whom you may know today as Ram Dass.  Alpert was an associate of Timothy Leary, an early researcher into LSD.  “Turn on, Tune in, Drop out” was Leary’s mantra and I was “all in.”  Many strong doses of high quality LSD shattered my ego and opened a portal to the “all there is,” aggressively revealing to me that “all” is energy, I am one with energy and can fuse with infinite energy, or not, as I will.  You see, I discovered that my immediate environment is completely under my own control.  Yet, I was chagrined to realize that most human interaction is gaming, pure and simple.

But LSD was too intense; it physically incapacitated me.  So after hundreds of “trips” I turned to Transcendental Meditation as taught by the Beatles’ guru, the Maharishi Mahesh Yogi.  Despite his title yogi, I did not realize that the meditative practice he taught is the final limb of yoga, best achieved through mastery of the preceding seven limbs of yoga.  Thus, even with my own personal mantra, achieving the true meditative state (samadhi) was a struggle.

At the same time, I earned a degree in Jungian Psychology from George Mason University and went on to graduate school under the same Jungian teacher.  I learned archetypes, synchronicity, the collective unconscious, and even started casting I Ching coins to predict the future for other students.  I studied the Tao Te Ching, The Tibetan Book of the Dead, The Bhagavad Gita, Philosophia Hermetica, the Bible, and any other ancient texts I could get my hands on.  I studied the work of Madame Blavatsky, Aleister Crowley, Manley Hall, Ophiel, Starhawk, Anton LaVey and more.

And then, in mid-life, someone taught me human energetics and how to clear my chakra.  Bringing chakra clearing into my meditative practice opened the astral field to me and I was able to perceive guidance from the infinite.  Yet again, I didn’t realize this was yoga!

Fast forward through life, I finally came to the physical practice of yoga known as asana, the second limb.  I was lucky enough to land in a studio whose owner taught yoga as both a physical and spiritual practice.  It seemed each asana class I took opened me to myself, layer by layer, and I realized yoga was a path to what I had been seeking all my life.  So I took yoga teacher training, learned the eight limbs, and the puzzle pieces fell into place.  Yoga ties it all together and provides a path to enlightenment by following the eight limbs, mastering them one at a time in sequence.

As a member of the faculty in the School of Consciousness & Spirituality, I am thrilled to be able to offer a simple course in the first limb of yoga, the Yamas and Niyamas at the NewEarth University.  My intention is to provide a foundation from which to build your own spiritual practice and knowledge to bring you into contact with the infinite, the “all there is.”  It is from that position that all things manifest, including your intentions.”

And now we begin yoga.  (Patanjali’s Yoga Sutras, Book one, Verse one.)