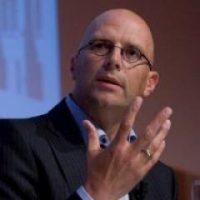 Jan de Dood – In recent decades, we have witnessed a burgeoning “boom and bust‟ mentality in our existing economic and financial order. The economic/financial system, which is increasingly taking on a life of its own and becoming more and more detached from reality, will have to realign with reality at some point. This can only be achieved by a complete reversal in economic/social theory over the coming years, and a total realignment in the fundamental reality of financial flows.

Jan’s contribution to achieve this is integrally aligned with his former work within the Rabobank. He was a Director of the Rabobank, and worked for about 35 years in the financial sector. Both as an employee for the Rabobank as well as manager of his own company. Besides his work within the financial sector, he is a member/advisor of several Foundations and initiatives such as, Center for Human Emergence, Manifesto Business coaching and Focafet.

His aim is to provide new thinking and new ideas for our future world. To materialize/realize this, he started a project (in cooperation with Marieke de Vrij) named “The Future of a Truly Stable Economic Order”. The project mainly covered issues with a specific focus on economic, financial, political and social developments, with the aim of generating a deeper awareness of these subjects. They have considered at every juncture what the impact of each of these developments are, or might be on and in the world’s different geographical regions. Not only did they look at the correlations, but they also attempted to reveal the deeper trends in universal consciousness. Their key conclusion is that we find ourselves in a process of transformation from old systems and structures to new ones. The financial/economic crisis is a (material) manifestation of this. The entire financial system, the epitome and symbol of the society people have created over recent decades, has lost its luster and has collapsed under its own weight. Attempts are already being made to clear away parts of these old structures, but (unfortunately) these old structures and systems are not always easily replaced. In many cases it is apparent that action undertaken on the back of the turbulence and chaos caused by the credit crisis is often based on outdated knowledge and instincts. Falling back on Keynesian concepts and appointing certain regulators who still operate according to old principles are examples of this.  The coming years will continue to be marked by the dismantling of old structures. A process that will generate many new problems.

“Given the speed and intensity of these changes, it is now time to start thinking about how our new society should look.  A society whose every facet will have undergone change.  My intention is to consider how the future could develop positively for everyone’s benefit.  I aim to indicate what is demanded of each of us and how we can best achieve our common goals.”  –  Jan J.Ph.M. de Dood