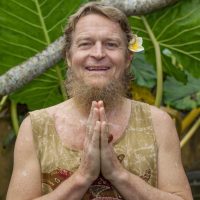 Dr Arpana Obrien aka Dr Didge Dolphin joined the NewEarth University (NEU) after attending the 2019 NewEarth Festival with its 3-day World Health Sovereignty Summit in Bali, Indonesia. He serves on the faculty as an Anatomy Educator in the School of Health & Wellness – discipline of Wellness Sovereignty.

Dr Arpana Obrien retired as an integrative medical doctor GP (general practitioner) in 2016 after 28 years of practice and now devotes his time to being a yoga teacher, anatomy educator and sound medicine practitioner. Arpana’s knowledge of yoga and functional anatomy, in tandem with many years as a musculo-skeletal practitioner and medical acupuncturist inspires his colourful character, “Anatomy Man” to deliver engaging and educational anatomy material.

Together with his wife ShamanaTara (also a senior yoga teacher and sound medicine woman), they formed their own brand of fluid yoga called, WhaleDreamers Yoga. Both share their teachings and practices internationally, spending time between homes in Byron Bay, Australia and Ubud, Bali.

Dr Arpana – also known as Dr Didge Dolphin – has been playing didgeridoo for 30 years and is adopted by yidaki (didgeridoo) master and senior custodian Djalu Gurruwiwi of the Yolngu aboriginal clan from North East Arnhem Land Australia. After decades of playing professionally he now devotes his practice primarily to sound healing and playing within yoga classes.